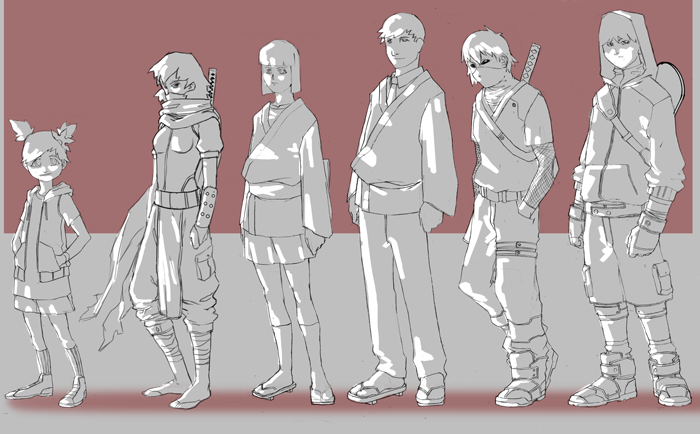 For those of you who follow Ninja Express, you know the series’ artist is Drake Tinta. He has been with the series since issue 1 (actually since issue 2 but I’ll explain that later). But Drake wasn’t the first artist to be involved with Ninja Express. Before a chance encounter brought him into the series I had a great deal of difficulty finding and keeping an artist for my book. For novice writers who cannot draw, from my experience, this is the most difficult part of the indie comic creating process; finding a place to hire an artist, getting one willing to work within your budget, and hiring someone who will actually complete the work by deadline. The years I spent searching for an artist for Ninja Express were by far the most difficult ones I have experienced as an indie creator.

Ninja Express first came into existence one night during a party at a friends house. My friends and I, who are all devoted fans of anime, were playing video games (Super Smash Bros. Melee if I remember correctly) and talking about the current season of anime. We were all in our last years of college and the realization that we would all soon be entering the “real world” was sinking in. I was miserable in my business courses. The ideas of the anime series in conceived several years earlier had resurfaced with my reignited interest in comics, anime, and manga.

After mentioning my old story concept and my growing interest in creating my own comic based on anime, the conversation turned into the first of many brainstorming sessions I would have with my friends about Ninja Express. I had the longest conversation that night with my friend Johnny, who had a mild interest in drawing at the time and thought it’d be fun to work on Ninja Express with me. We worked together for about nine months. He worked on several character concepts during this time (none of which carried over to the finished project but were a useful source of inspiration for me).

During our collaboration a lot of progress was made on the character designs during the first few months, but as time went by, production slowed and communication between us became difficult. In the beginning we would talk on the phone or meet in personal at least once a week. Toward the end it was hard for me to even reach him to find out if he was still working on Ninja Express. Eventually, we did have a sit down where we discussed the future of the comic. I viewed Ninja Express as the start of my career in comics. For Johnny, it was a hobby, one his interest was waning in. We decided to part ways on the project before any lasting grievances arose that would permanently affect our friendship in a negative way.

My next artist collaboration involved a collage acquaintance I had known to have artistic talent. This was my shortest artist collaboration. I met with him one day in the campus cafeteria. After a lengthy discussion he agreed to collaborate with me on Ninja Express and said he’d get back to me soon with character concepts, and a few weeks later he did approach me with fine looking art concepts, but that was the last I heard of him. I did see him around campus a few times after but I didn’t bother discussing the matter with him.

The lesson I took away from these first two collaboration attempts was simple: when looking for collaborators (at any level and in any field) make sure they are as invested in the project as you are. When and if you do encounter this, it is best to sever ties and continue forward, even it if means you do so alone. Eventually you will find people with passion that matches your own.

This is not by any means meant to discourage you from working with friends and acquaintances. In fact, among the roster of the current Ninja Express creative team, our letterer/ colorist, Osjua Newton, is one of my best friends. I knew him for a few years in college (He also plays a foolish n Elf Ranger in my D&D campaign) before he joined the series.

After these two experiences I gave up on finding a collaborator for Ninja Express and looked into finding a work-for-hire artist. At this time I was working with the indie comic creator collaboration group, Pronto Comics. They were self-publishing work as well as helping creators form collaboration teams. They had begun making connections at art colleges and we would send out artist commission requests. I was looking for an artist to draw Ninja Express issue 1 to appear in Pronto Comics’ manga anthology series, Manga Nation

I emailed a commission post to the art student job board. I was looking for character concept art and page art for issue 1. A few days later I received a reply from an artist (for the purposes of this story let’s call him Joe). Joe and I agreed upon a rate for the concept art and page art, but I did feel that he thought the rate was too low, which I do think played a role in how this collaboration played out. We wrote up a contract and signed it. I sent him over my script and waited for my comic to come to life

I was relatively happy with the concept art. They were detailed and close to my description. On a side note, always be open to artist additions to your work. They are the more visual part of a writer-artist duo and additions to your work usually enhance the concept. Drake Tinta has added a great deal of his own flavor to Ninja Express. He populated the world of Ninja Express with an array of strange creatures I never dreamed of.

The only problem I had with the concept art was that my character, Otaki, who is on the short side, was drawn tall in the concepts. He said he would correct it. I thought he’d redrawn Otaki shorter as I described, but he just squished the image down in Photoshop to make Otaki appear shorter

I received the first page of art quickly after that. It looked fine. It was drawn as described, neat lines, and good detail. Then there were no updates for several weeks. The then editor of Manga Nation, Josh Cabrera, wanted to get the first issue of the series out  and Ninja Express was the only story he was waiting on. Due to the delays Manga Nation #1 went to the printers without Ninja Express. This was also unfortunate for me because New York Comic Con was approaching and I desperately wanted to have a completed comic to show. I emailed Joe again. I reiterated my time concerns and the urgency in which I needed to pages, as well as reminded him he was overdue as per the contract we signed.

Eventually, Joe got back to me. He sent over the remainder of the pages. They looked terrible. He had obviously rushed the work. Many of the the panels were barely beyond sketches. He had also photoshopped several of the character concepts into the panels. He used the concept art of my lead female character, Sayaka, several time during the pages rather than redrawing her. He also used other concepts multiple times as background characters.

To birth a concept in your mind and have the realization of it fall short of your hopes is devastating. I was furious. I wanted to refuse to pay Joe until the pages were redrawn. Unfortunately, I was under great time constraints. The deadline for Manga Nation 2 was fast approaching and Comic Con was weeks away. So in spite of my disappointment and anger, I paid Joe and rushed to get Ninja Express #1 finished in time for Manga Nation’s deadline.

Ninja Express barely made it into Manga Nation #2. It looked terrible but I did have a sense of pride in having seen through with my goal of publishing a comic. Few people who set out into the world of indie comics can say the same. It is a difficult road. Finished is almost always better than perfect. Most people hate their early work, but that’s because they have improved so much since then.

With copies of Manga Nation #2 in hand I set out to sell them. Everyone of my good friends bought a copy and not one mentioned how bad it was. I thank them for that. It gave me the confidence I needed to keep going. Anyone you know who will buy a Marvel or DC comic and turn up their nose at your self-published book is not a true friend.

I hold no ill will toward Joe today. I learned a lot from our collaboration. First, you get what you pay for. I offered a low page rate, and I got low quality page art. Pay your artist what they are worth! This may mean saving up for months or years before being ready to start the artist search. You can also offer your artist a percentage of the profits or royalties. Crowdfunding comics is also a popular avenue (Something I am looking into for future projects).

Second, don’t pay for art that you are not happy with. You are paying for a service. Don’t be afraid to ask for revisions and/ or corrections. This is actually something I still struggle with. I’m afraid to offend my collaborator but disagreements are part of the creative process and very few works, scripts and art, are perfect on the first draft.

I met Drake Tinta shortly after Manga Nation #2’s release. He heard of Pronto Comics at New York Comic Con and came to the group’s post-NYCC meeting. We chatted at the meeting. He flipped through Manga Nation. He liked Ninja Express’ story but was unimpressed with the art. In the weeks that followed we agreed on terms, sign a collaboration agreement and he began working on Ninja Express #2. He would later redraw issue 1 because of how poorly it came out

It was a good thing that I had issue 1 drawn up (albeit poorly). Having a finished comic in hand did help me find my next collaboration. I cannot stress how important it is to have completed work in the indie comic business. Just having something done shows how serious you are. And you can only improve from there, and trust me, you will!

On a side note, if someone reading this out there has a copy of Manga Nation #2. I would happily trade it with you for a copy of Ninja Express #1, featuring Drake’s redrawn art, or take $2 off your purchase of Ninja Express volume 1.

Over the years I have found art collaborators both in person and online. My in person success has mainly come from convention networking. When tabling or just as a con goer, I always exchange business cards and information with any creator I meet (artist or otherwise) I have interest in working with in the future with or just to keep in touch with. Conventions are the best place to meet indie creators in person and make lasting connections.

Whichever path you choose to explore, the important part is to get out there and complete your comic, no matter the number of setbacks you encounter.